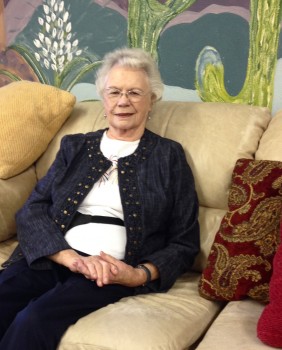 Love often is unexpected. Peggy Cisar of Craig certainly didn’t expect to find it in the years following her former husband’s death.

Peggy and Al had been happily married for more than three decades. It was hard to know how to go on without him. “I just wanted to just go to bed and pull the covers over my head,” says Peggy, 85.

She felt isolated and deeply lonesome. Her sons and their families were supportive but did not live nearby.  “I had no one here that I was close to. I was terribly, terribly lonely.”

Still, she wanted to stay in her home and community, where’s she has lived since 1955. “I love Craig, Colorado. I like the people; I like the country.”
About seven years after losing her husband, Peggy happened upon a notice in the newspaper about a memoir writing class. Intrigued, she decided to attend.

The CNCC class was held during Wellness Wednesday, a day of activities for seniors that includes fitness classes, wellness checks, lunch and card games. It takes place at The Journey at First Baptist church. Wellness Wednesday has been offered by the Northwest Colorado Visiting Nurse Association for nearly 8 years and has attracted a loyal following.

It wasn’t long before Peggy was exercising and enjoying lunch and card games with the lively group. The day raised her spirits and gave her something to look forward to. “I lived from Wednesday to Wednesday.”

While playing pinochle, Peggy became reacquainted with Walt, a man she had known for a long time, though not very well. He was a widower and, like Peggy, missed having a companion. They started spending time together outside Wellness Wednesday. Six months later, they were planning a wedding.

Walt and Peggy sent invitations to their families and friends but didn’t expect a big turnout. Their children, grandchildren and great grandchildren – toting food and beverages – attended along with many Craig friends. 125 people signed the guestbook that day. “I think everyone from Wellness Wednesday was there.”

Since that day three years ago, the Cisars have travelled – their adventures include trips to England and Czechoslovakia – and enjoyed frequent visits with their families. They are planning RV trips this summer.

Peggy continues to write about her memories and experiences, which she hopes will give her family perspective on life’s many changes. This new page in Peggy’s life will make a wonderful addition to that collection.

CLICK HERE for more information about Wellness Wednesday or call
970-871-7676.