The United States is experiencing a multi-state measles outbreak that started in California in December 2014. As of Jan. 28, 2015, there were 51 confirmed cases, including one case in Colorado. 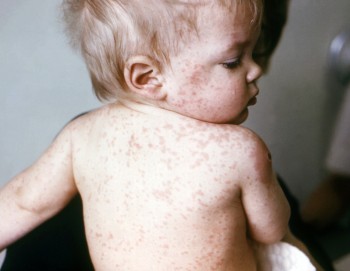 The measles was declared eliminated in the U.S. in 2000 due to a high population immunity to the disease resulting from a very effective vaccine. Measles remains endemic in many parts of the world and outbreaks can occur when unvaccinated groups are exposed to imported measles virus. In 2014, prior to the California outbreak, the Centers for Disease Control and Prevention reported unusually high number of reported measles cases. In September 2014, there were more than 120 cases, the highest number reported since 1996. Many of the cases were linked to travel to the Philippines during a large measles outbreak in that country.

Measles is a highly contagious, viral illness. Symptoms generally appear seven to 14 days after a person is infected and begin with fever, cough, runny nose and conjunctivitis (red, water eyes). A rash appears within five days after symptoms start. Infection can cause pneumonia, encephalitis and death. Infection can be prevented with the MMR (measles, mumps and rubella) vaccine.

Parents in the process of adopting children from other countries should be aware of measles risk. Children who haven’t had MMR vaccine could be incubating measles at the time of adoption, especially if they were in an orphanage environment. It’s important to connect with a primary care provider and closely monitor the child’s health upon coming back to the U.S.

CLICK HERE for more information about measles vaccination. The MMR vaccine is available at the Northwest Colorado Visiting Nurse Association. For more information, call 970-879-1632 in Steamboat Springs or 970-824-8233 in Craig.